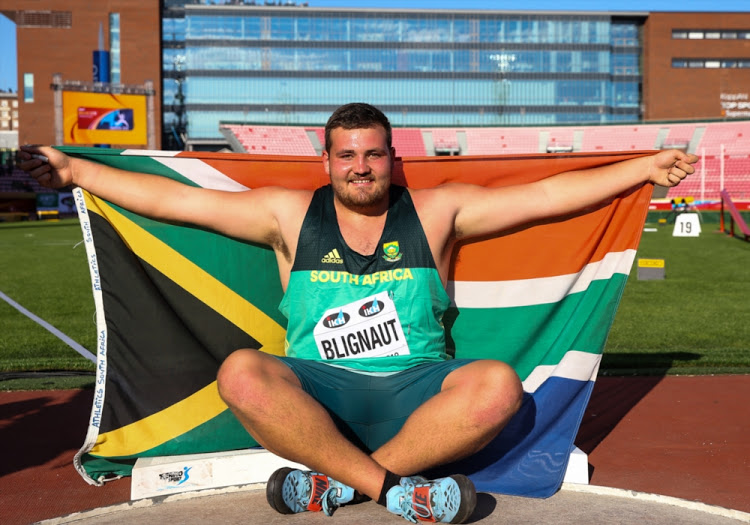 Photo of Kyle Blignaut after winning SA’s first gold medal at the World u20 Championships in Tampere. Photo by Roger Sedres/Gallo Images

Team South Africa could have not asked for a better outing, at the IAAF World U20 Championships, in Tampere, in Finland, last week.

This comes after they finished the Championships in sixth place, bagging three gold medals and one bronze. While Kenya topped the medal standings, followed by sprint powerhouses Jamaica and the USA. They were followed by Ethiopia and Great Britain and Northern Ireland who made up the top five.

SA have now finished in the top six of the medal standings in the last three World Championships (Youth, Junior and Senior) which shows the consistency at global competitions.

Team SA were led by Zeney van der Walt and Sokwakhana Zazini who added the World Junior titles to their youth crowns they won, in Nairobi, in Kenya, last year.

Van der Walt who has been in fine form all season, clocked 55.34 seconds, in the girls’ under-20 400m hurdles event to be crowned champion. SA’s golden girl could have not asked for a better way to end off her competition in Europe.

The duo from Athletics Gauteng North will now turn their attentions to the CAA African Senior Championships, in Nigeria, next month.

Kyle Blignaut who picked up SA’s first gold medal of the Championships won the boys’ under-20 shotput event with a distance of 22.07m. Blignaut came into the competition as the favourite to lift the shot-put title lived up expectations following his dominance this season.

Western Province Athletics Breyton Poole finished in third place in the boys’ under-20 high jump event which was a tightly contested competition.  Poole finished third on countback after the top four all cleared 2.23m.

Despite not making it onto the podium, the University Sports South Africa (USSA) 100m champion Thembo Monareng had a great outing following his fourth place finished in the 100m finals clocking 10.23 seconds and missing out on a podium finish by just 0.01.

Athletics South Western Districts Mieke Strydom would had been impressive with her fifth placed finished in the girls’ under-20 shot put event with a best heave of 15.89m. Strydom has been in good touch all season following her first-place finish at the ASA and South Regional youth and junior championships, in April.

“I am happy with my result although I never made it onto the podium. It was a honour for me to represent my country. Next stop is the CAA African Champions which will be my first major competition as a senior,” said Strydom.